Let’s play a game: remember when you were a kid and you’d try to outdo each other with certain scenrios? “Would you rather have a papercut on your eye, or have someone stomp on your head after putting your teeth on the curb?”

That sort of thing.

Well, I have a good one.

I know which one I’m doing.

As Rita continues her ponderous approach towards the city, about a quarter of the population (one million people) has left, with another quarter already on the move.

Roads are clogged everywhere. The highways near my house are virtually immobilized, and have been since last night. They’re moving at about 4 mph.

The good news is that Rita has dropped some in severity but remains firmly in category 5. 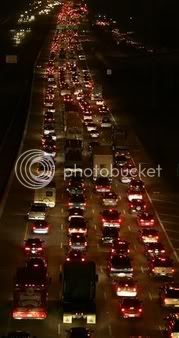 Wish me luck guys; I’m still in the city with nothing to do but, heh, weather this thing out.

I’m really not sure what else to say about this so I’ll just quote the article itself.

Chavez has emerged as one of the most outspoken critics of President Bush, accusing the United States of conspiring to topple his government and possibly backing plots to assassinate him. U.S. officials have called the accusations ridiculous.

“You know, I don’t know about this doctrine of assassination, but if he thinks we’re trying to assassinate him, I think that we really ought to go ahead and do it,” Robertson said. “It’s a whole lot cheaper than starting a war … and I don’t think any oil shipments will stop.”
…
“We have the ability to take him out, and I think the time has come that we exercise that ability… we don’t need another $200 billion war to get rid of one, you know, strong-arm dictator,” he continued. “It’s a whole lot easier to have some of the covert operatives do the job and then get it over with.”

And people wonder why I consider fundamentalists a danger to the U.S.. Scary.

For those who don’t know, if I can manage to wrangle a living out of something I enjoy instead of a “real” job, I’ll be more than willing to take whatever comes my way. It has to be better than working at Target.

For the longest time, I’ve wanted to be a writer. Recently I just moved one step closer to that dream. I was hired by a website to write movie reviews for them. The job is unpaid, I have to supply the money for tickets myself, and the reviews will be read by 600,000 people a month tops. However, it’s the principle: my writing will be seen by more people than my closest friends and family.

I’m writing under the psuedonym “Bachalon.” If you have the chance, check out my reviews (only one as of this writing, by I’m putting the finishing touches on a second one).

Found this in today’s Sunday Herald, and thought I’d share some of it with you guys.

For the government of a secular country such as ours to treat religion as if it had real merit instead of regarding it as a ridiculous anachronism, which education, wisdom and experience can hopefully overcome in time, is one of the most depressing developments of the 21st century. Religious people must be treated with the same respect as non-religious people, but their religions should quite properly be regarded with the weary contempt they deserve. Instead we have debates on TV news shows between hardline Muslim scholars and moderate Muslim politicians without any intervening voice of scepticism suggesting that the whole darned thing might be just as invented as virgin births and Mormon tablets.

We have bishops arguing with Christian women about ordination as if this is an important issue, again without the obvious interjection that it is unlikely in the extreme that there exists any god at all, never mind a peculiar one who cares what sex wears the cassock. And there goes old nutty Ruth Kelly using taxpayers’ money to introduce a whole new clutch of assorted religious schools that will abuse the innocence of trusting children by teaching them superstition alongside facts to ensure they cannot separate the two.

The defence of any attacked faith is always to say: “You don’t understand our religion.” It’s considerably more likely that those defenders of their rrational beliefs have failed to understand Montesquieu, Hume, Rousseau and Diderot. The tattooed drunken morons attending an Orange walk are hardly theologians.

Since these are dark days, it’s time to stop all this polite tiptoeing around religion and harden up accordingly. Our elected leaders constantly bleating their respect for religion is not political correctness but a public declaration that intellect, tolerance, democracy, reason and enlightenment are of less value than dogma and delusion. Now’s the moment for a clear, definite, distinct line to be drawn between state and religion, one that defends the individual’s right to follow whatever ideology he or she wishes within the law, but also firmly declares and vigorously defends our collective ideals of gender equality, respect for differing sexual orientations and reinforces the message that there is no room whatsoever for the supernatural and the irrational. No bishops, mullahs, Presbyterian ministers, rabbis, or Scientologists should be gifted special hearings at Downing Street, but should confine themselves to wielding their power and freedom as the rest of us do, namely as ordinary voters, and the state-funded faith schools that shame us all with their manipulation of young minds must cease. We have all been mugged, but the shock must take us back to reason and as far away from religion as we can get.

What do you think?

If you head on over to the trailers section of Apple’s quicktime section you can catch a glimpse of Hayao Miyazaki’s new film Howl’s Moving Castle.

It looks a bit different than what I thought it would be. I read the book a few times as a child, so my interest is suitably piqued.

Lagos left the classroom and saw his friend Inumæn the Cruel strolling across the campus and ran to catch up with his friend.

Lagos spied a book clutched tightly in the crook of his friend’s arm and asked about it. Inumæn held up a worn copy of Despotism for Dummies.

Lagos shook his head, chucking mirthlessly, “The Idiot’s Guide is better, but neither is an effective treatise. Having trouble in class?”

“You wanna talk about it? Everyone needs allies; and second doesn’t start for another fifteen minutes.”

“Um,” he glanced at his watch, “Sure. We can get something at the coffee place around the corner.”

“Sounds good to me.”

They walked together in silence until the edifice loomed before them, a drab building baring an ornate plaque emblazoned with “The Conqueror’s Café.”

They went in, the bell on the door singing happily as it was jangled. The place was empty as it almost always was before second period, and they were able to saunter up to the counter, place their orders and retire to one of the back tables in a few minutes.

Lagos looked around, “This is what I like about the early morning. There’s no one here. It’s so quiet. Anyway,” he talked between sips, “What seems to be the trouble?”

“I don’t know. Lately I’ve just felt inconsequential, inadequate. I mean, you remember that short guy with the red hair? The dude that was wider than he was tall?”

He grunted an acknowledgment through a mouthful of coffee.

“Well recall he dropped out at the beginning of this semester.”

“I found out today from the Last Free Press that he’s already subjugated most of Southeast Asia, and the rumors are saying that he’s the unseen ruler of the remaining portion of the continent.”

“Like I said, don’t use the accomplishments of others as a basis for your own worth or achievements. That’s unfair. I’m sure that when your time comes, you’ll make a superb
totalitarian. You’ve got the strongest will on campus. And let’s not forget that suffix of yours.”

“Yeah,” he said, a smile blooming across his face, “I could be great couldn’t I?”

“That’s what I’ve been saying. Just relax and let the world realize it.”

“I will,” he nodded sharply, “Thanks Lagos.”

“Not a problem. Anything else bothering you?”

“The idea of conquest without contribution, maybe, but I think I’ll delegate that to one of my trusted lieutenants.”

“Well,” Inumæn glanced at his watch, “It’s almost time for second; I need to get going or I’ll be late.”

“You have math next don’t you?”

“First to go upon your succession, eh?”

They laughed as they pulled out their chairs.

I’ve been thinking about Terry Ratzman (among others) lately, and I’ve noticed something odd: when violence occurs with a loose connection to violent video games or music the noise for condemnation is swift and harsh, but when something happens with links to the book of revelation (it seems to be the favorite book of crazy people) no one speaks of banning christianity or putting warning stickers on that damnable book.

Why do you think that is?

As a budding psychologist with little restraint and plenty of opportunity, I’ve found myself irritated with answers to several questions that I feel warrant more consideration than they are given when I ask.

Some people brush them off as unsettling, if harmless, ‘what if…’ type questions. Others have given me answers quick while getting progressively more angry with each one. A woman I asked got so upset that she had her husband threaten to beat me up for asking her about the ‘psycho-baby question.’

Even I’ve spent much time agonizing over all the possible meanings of the answers that people give, everyone from my mother, to some close friends, to random strangers. The conclusion I’ve reached is that people are selfish, but in a way that they aren’t accustomed to.

I’m not saying that child-rearing isn’t a noble endeavor, but it seems that the motives are less than altruistic. Be honest, do we really think our children are going to cure cancer? To decipher time travel? To answer the question of existence?

Now think about this: What if you knew with absolute certainty that your first child is going to be murdered before he or she is twenty-five. The specifics only dictate that it’s the most agonizing and excruciating death you can imagine. You don’t know where or when, only that it will occur in the future. Even if you have more than a single child, the first born will be dead. Will you still have the child?

If so, why? I’ve heard parents say they would die for their children, but would you willingly send someone into a death you wouldn’t wish on someone else?

Now consider this: Your first born child is going to grow up to be a serial murderer. Regardless of how you choose to raise the child, he or she is going to horribly kill 17 or more people before age forty. Would you still have the child?

If so, why? Would you be willing to face his or her victims in court and tell them that you knew this was going to happen, but allowed it anyway?